About Malabar – 80 Years of History

Malabar Machine Company was started by E. P. “Ed” Grime in Los Angeles as a machine shop for manufacturing items to customer drawings. Grime was a genius in hydraulic engineering and a man who combined engineering with the pioneering instinct to do what had not been done before.

In 1939, Grime was approached by Lockheed to design and build the first tripod jacks specifically for an aircraft. These hydraulic jacks were the first to incorporate locknuts on the rams, preventing any inadvertent lowering of the jacks. The benefit became an important safety precaution for workers under the aircraft. The company incorporated the locknut design into all of its aircraft tripod jacks and received a patent for this innovation. 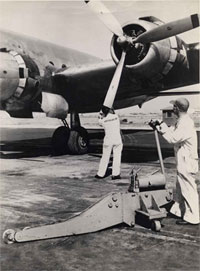 From this beginning, Malabar’s primary business became aircraft jacks, including axle jacks for changing aircraft wheels and tires and tripod jacks for in-hangar service. During World War II, it became apparent that a larger facility was required to meet production requirements, so the company relocated just a few miles south in the Los Angeles area to what is now Huntington Park.

In 1945, the company was acquired by Menasco Manufacturing Company and relocated to Burbank. After 1945, military business had become virtually non-existent, so sales efforts were redirected to domestic and international airlines and airframe manufacturers.

In 1950, the business was sold to the Osborne Machinery Company and was relocated once again to San Leandro in northern California near the Oakland Airport. In the summer of 1951, Roy Hodges, a young college student at his summer job as an aircraft mechanic’s helper at California Eastern Airways, often heard from his boss: “Hey Roy, go get the Malabar so we can change this tire!”

In 1968, Osborne passed away, and E. D. “Gene” Sweetland acquired the company in 1969. The name was then changed to Malabar Hydraulics.

The first order of business under the new ownership was to design and build jacks for the new Boeing 747. Business grew very rapidly after 1971, enhancing the company’s reputation for quality and service. In 1977, the company had outgrown its facility in San Leandro, so in 1978 a new facility was built in Simi Valley, California.

Sweetland changed the name of the company again to today’s Malabar International.  The word “international” was used to reflect both the fact that approximately half of the annual sales were outside the United States and that Malabar’s line of aircraft ground support equipment was no longer limited to hydraulics. The company’s wheel and brake equipment, nitrogen service carts, and recovery jacks do not have hydraulic components.

Today, Malabar International sells product in over 60 countries around the world and our product line has expanded to include B787 and A350 jacks and service carts, hundreds of different types of fluid dispensers, test stands, weigh equipment, strut service equipment and a new line of jacks exclusively built for business jets.

The company logo has undergone many changes since 1935, but one word has consistently grown in recognition worldwide for quality and reliability in the ground support equipment industry: “Malabar.”